“The mere fact that SMM can once again take place as a live event after the coronavirus-enforced hiatus is a highlight in itself,” says Bernd Aufderheide, President and CEO, Hamburg Messe und Congress (HMC ). Celebrating its 30th anniversary at the same time makes this maritime gathering even more special, he adds. After a purely digital version in 2021, the Hamburg exhibition chief expects around 2,000 exhibitors and 40,000 industry visitors from more than 100 countries to attend this year’s SMM. The eleven rooms are complete. All of this is quite remarkable considering the modest beginnings of the industrial fair: no more than 35 exhibitors set up their stands for the original exhibition “Schiff und Maschine” (ships and machines) in the exhibition halls of Hamburg in 1963.

By 1968, that number had risen to 212. As more and more
exhibitors joined, the title of the event also lengthened: “Ship and machinery” was supplemented by “Meerestechnik”, or maritime technology. To date, the shipbuilding, machinery and marine technology show has enjoyed sustained international success under its acronym SMM. “I am sure that the members of the Hamburg Association of Naval Engineers (Vereinigung der Schiffs- Ingenieure zu Hamburg) who founded the forerunner of SMM would be proud of us. What was once a predominantly German event with some 200 exhibitors in 1968 is today a leading flagship trade fair with an international reach,” says Aufderheide. A shipping world without SMM is hard to imagine SMM’s success is likely due to its organizers’ shrewd instinct for what the industry really needs. This year, SMM is putting more emphasis than ever on maritime energy transition, digital transformation and climate change. Many exhibitors consider SMM a must-attend event: “As a technical provider for the growth of the marine energy transition, we need SMM as the perfect international stage to showcase our MHI Group technologies to decarbonize the shipping industry” , says Toshiaki Hori, CEO of Mitsubishi Heavy Industries Marine Machinery & Equipment. For Knut Ørbeck-Nilssen, CEO of ship classification society DNV Maritime, SMM is nothing less than the “home of shipping”. The main sponsor of the event presents this year its new “Flagship report – Marine forecasts to 2050”. “With a focus on fuel sustainability and the carbon-neutral fuels needed to achieve decarbonization, this year’s report is really going to give the industry a lot to talk about,” says Ørbeck-Nilssen. 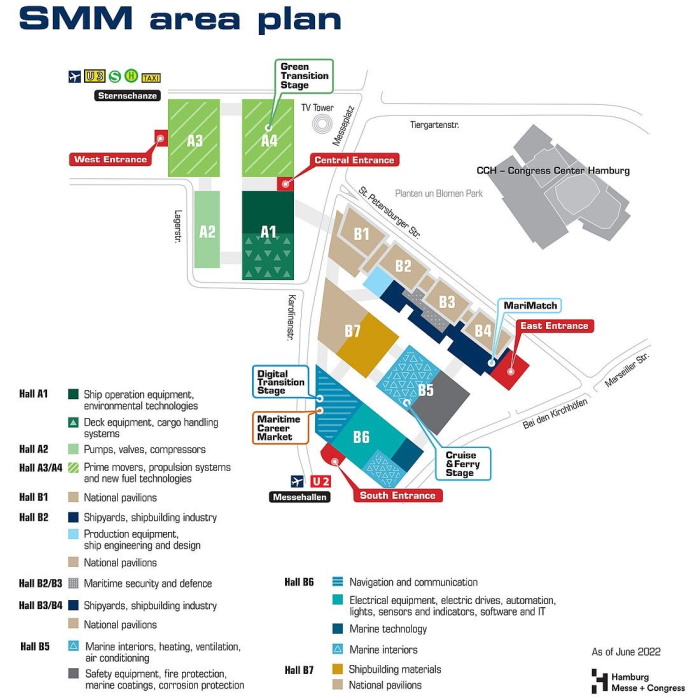 For the SMM 2022, the organizers are staging the chosen theme, “Managing the maritime transition”, while emphasizing the unique interactive nature of the show. “We have deliberately reduced some of the exhibition areas in favor of the transition stages in order to give participants more space to present their ideas and product novelties in an open forum”, explains Claus-Ulrich Selbach, director of the business unit at HMC. There will be three stages in total, each dedicated to a particular theme:

After each day’s program of lectures and presentations, the new “Wine o’ clock” networking format will provide additional opportunities to get answers and make new business contacts.

From MAN Energy Solutions’ multi-tonne methanol-ready dual-fuel engine to WISKA’s lightweight energy-saving LED lamps, the exhibition halls will showcase innovations large and small, grouped by theme. For example, halls A3 and A4 host companies developing alternative propulsion systems or exploring green fuel solutions, such as Rolls Royce: “Our contributions to the journey to carbon neutrality include everything from diesel engines with exhaust or gas engines and the use of sustainable fuels, to hybrid systems, methanol engines and fuel cell systems,” spokeswoman Silke Rockenstein said.

Rolls Royce will also be showcasing new ship automation products. Smarter solutions will be showcased in hall B4 where renowned shipyards will be represented side by side with digital experts. For example, the cloud-based platform Naval Architect was developed to merge all relevant information in shipbuilding projects to minimize risk. Halls B5 and B6 form the MARINE INTERIORS @SMM section where everything revolves around the design and interior fittings of passenger ships. Stands with big names, such as Kaefer Schiffsausbau or Rheinhold & Mahla, are set up there. The complete layout of all exhibition halls can be found on the site plan. Themed routes (Cruise & Ferry Route, Digital Route, Green Route, Job Route, Security & Defense Route, Start-up Route) guide visitors conveniently through the 90,000 square meter exhibition to exhibitors of interest .

In addition to browsing the exhibition halls, visitors looking for major innovations and key ideas are invited to turn to the stages where the five specialized conferences of the SMM take place. Here are the themes of the conference:

• Digitalization & Cybersecurity: September 5 at the Maritime Future Summit
• Market Overview and Finance: September 6 at the TradeWinds Shipowners Forum
• Environment and alternative propulsion: September 7 at the gmec. – New: The NGO round table will be open to the general public. For more information, please see: SMM Digital Platform – SMM (smm-hamburg.com)
• Science & Wind: September 8 at the Offshore Dialogue. – New: This conference is an event of the United Nations Decade of Oceans, an international research project for the protection of the oceans
• Security & Defense: September 8 and 9 at the MS&D

Support program
SMM comes with an attractive support package including:

• Women in maritime jobs: On September 7 at 4:00 p.m., WISTA Germany will elect the Person of the Year (PoTY) in the green transition arena.
• Start-up Night: Start-ups will introduce themselves and pitch their projects in individual sessions and compete for the best new idea. On September 7, the winners will be presented with the Maritime Start-up Award on the stage of digital transition. The competition has three categories: Digital, Environmental and Shipbuilding & Machinery.
• Maritime Talent Exchange: On September 9, the Maritime Career Market (MCM) will take place in Hall B6. From 10 a.m. to 2 p.m., experts will introduce you to the world of maritime employment. At the MCM, graduates, students and young professionals can meet potential employers. Admission to the MCM – and the whole of the SMM – is free for high school students
school and university students on Fridays.
• Cruise Talk: On September 6-7, Artlink CEO Tal Danai and his panel of prominent guests will discuss the future of cruise shipping in the Cruise & Ferry scene.
Source: SMM