CHARLOTTETOWN, PEI — When Seaman 1st Class Ryan Lawrence was a junior member on a Canadian Navy ship, he was assigned scullery duties in the ship’s mess.

The seas were rough as the ship crossed the Atlantic. Lawrence was trying to chop vegetables with the whole piece bobbing and rolling – that’s when he thought of his grandfather.

“Trying to do anything with my hands, like preparing food or helping the cooks, was nearly impossible in the sea state,” he said.

His grandfather, Joseph Lawrence, served as a cook on several naval tours between 1942 and 1945, including crossing the Atlantic aboard the frigate HMCS Toronto and the corvette HMCS Prescott.

“We are traveling on a huge frigate,” Lawrence said. “The ships my grandfather traveled on were half the size…I don’t even know how he could do that.” 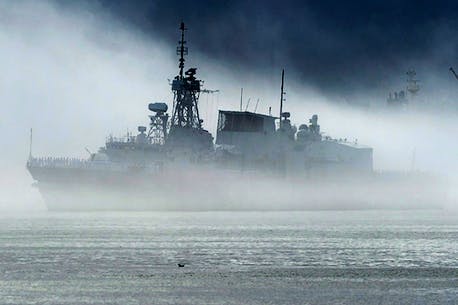 Battle of the Atlantic

Lawrence was in Prince Edward Island to commemorate the lives lost in the Battle of the Atlantic in a ceremony held on the first Sunday in May each year.

“This is a solemn occasion,” Commodore PJ Montgomery told the group of sailors, dignitaries and guests gathered at HMCS Queen Charlotte on May 1.

The Battle of the Atlantic lasted from 1939 to 1945 and casualties included people and ships of the Canadian Navy, Merchant Navy and Air Force.

“We have seen years of fierce engagements and treacherous convoys…against the hidden enemy – the submarines. It was a harsh environment and we saw sailors and ships lost to weather and accidents as they fought the campaign,” Montgomery said.

Highlights: Battle of the Atlantic

• The navy escorted more than 25,000 merchant ships, transporting approximately 182 million tons of cargo across the Atlantic Ocean to Europe.

• During the Second World War, the Royal Canadian Navy grew from 13 ships to almost 400.

“We note that there are only a few heroes left to speak about these struggles, and this is our final opportunity to honor them and their families.”

One of these heroes was Joseph Lawrence.

He was only 17 when he enlisted, with his father’s permission, to serve in World War II in November 1940.

The young man from Regina, Saskatchewan was not allowed to use his Hungarian surname, Lorenz, at the time.

“You need something more Canadian,” he was told.

He looked around and seeing a map of Canada saw the Gulf of St. Lawrence.

“What if I changed my name to Lawrence?”

This was deemed acceptable.

“So from then on, on that date, my grandfather has that last name,” Lawrence said.

Joseph Lawrence hasn’t spoken much about his time in the navy, except to say that his wife, Islander Jean Hastings, was the best thing to come out of his time in the service.

“He was a man who never really talked about it,” Lawrence said. “He stayed alone and really kept it close to his chest.”

Jean and Joseph settled on the island and Joseph continued to cook, improving his game until he was recognized as one of the best chefs in the province. He also taught future cooks at Holland College.

“He’s sort of one of the founding fathers of ATHI,” Lawrence said, referring to the Atlantic Institute of Tourism and Hospitality.

An annual award continues as a legacy of his work as an instructor, the Joseph W. Lawrence Award for Excellence in the Culinary Arts.

As for Lawrence, he reached higher ranks than those in the scullery.

But his journey to the sea is not without similarities to that of his grandfather.

Lawrence worked at Pat and Willy’s Cantina in Charlottetown with his best friend Darcy Carr. The Naval Recruiting Office was one floor higher; they would see the officers around the building.

Carr took the first step and joined the Canadian Navy.

“He came back to the island on leave, he was – different,” Ryan said. “More confident, more comfortable with himself. … He kept telling me about all these adventures he had, I thought, ‘You know what, I want this.’

Lawrence and now Seamaster Carr are working together again, but these days it’s as Naval Electronic Sensor Operators, or NESOps. One of Ryan’s main roles is to coordinate with the Over Water Warfare Director as the Fire Control Officer to operate the fire control systems.