According to new data published today by the NGO Shipbreaking Platform, 763 ocean-going commercial vessels and floating offshore units were sold to scrapyards in 2021. Of these, 583 of the largest tankers, bulk carriers, floating platforms , freighters and passenger ships ended up on the beaches of Bangladesh, India and Pakistan, accounting for almost all of the gross tonnage dismantled worldwide.

“We have seen this environmental and human rights scandal for too long. All shipowners are aware of the disastrous situation of grounding yards and the lack of capacity to safely handle the many toxic materials on board ships. Yet, with the help of scrap dealers, the vast majority choose to scrap their end-of-life fleet in South Asia, as that is where they can make the highest profits,” [1] says Ingvild Jenssen, executive director of the NGO Shipbreaking Platform.

In South Asia, workers – often exploited migrants, some of whom are children – are at immense risk. Hazardous working conditions, including fires and falling steel plates, kill or seriously injure many workers. Many more are sickened by exposure to toxic fumes and substances that can be found in ship structures. Coastal biomes and the local communities that depend on them are being devastated by toxic spills and air pollution due to the lack of infrastructure to properly contain, manage and dispose of hazardous materials.

In 2021, at least 14 workers lost their lives when ships were destroyed on Chattogram Beach, Bangladesh, and 34 others were seriously injured. Local sources also reported two deaths in Alang, India, and two deaths in Gadani, Pakistan. Some of these accidents have occurred on board vessels belonging to well-known shipping companies, such as Berge Bulk, Nathalin Co, Polaris Shipping and Winson Oil.

“The sector suffers from a serious lack of transparency and it is expected that several accidents will go unreported. Many more workers suffer from cancers and other occupational diseases, due to long-term exposure to hazardous substances, including asbestos. We have started a fundraising campaign to help the victims of unregulated demolition in collaboration with new local partners in Bangladesh, and urge people or businesses to support us so that proper medical care can be provided,” says Sara Costa, project manager at the NGO Shipbreaking Platform.

“The UAE Ministry of Energy and Infrastructure recently proposed new regulations to promote sustainable ship recycling. It includes a clear ban on the use of beach facilities. This is an important signal that we hope will prompt UAE shipowners to quickly exclude the South Asian coasts from their demolition options and incentivize the establishment of new sustainable facilities in the region,” said said Nicola Mulinaris, senior communications and policy adviser at the NGO Shipbreaking Platform. .

South Korean Sinokor was the 2020 finalist for worst corporate dumper. Their practice has not improved and they are now at the top of the list of worst dumpers of 2021, having scrapped 12 of their carriers and LNG carriers in Bangladesh and Pakistan. An accident, causing a serious injury to a worker, occurred when the Mediterranean energy was cut off at the SN Corporation site in Chittagong. At the same site, a total of two workers died and seven were injured last year. 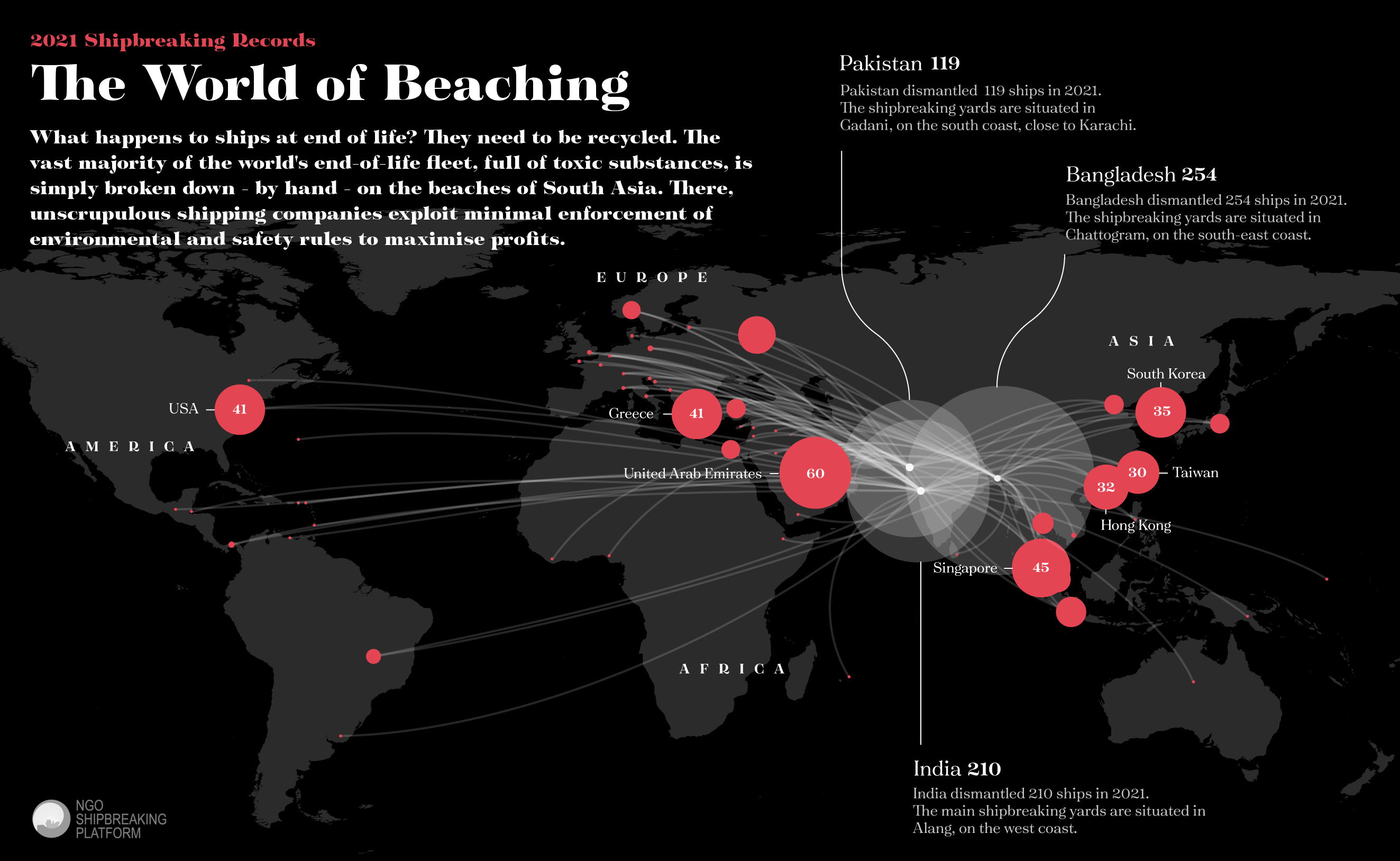 The pandemic continued to affect the cruise industry, with more companies taking steps to reduce operating expenses, including retiring relatively young ships. While major cruise lines have pledged to use EU-approved recycling yards, other unscrupulous owners have opted for the most profitable beaches in South Asia. As revealed by the BBC 4 platform and dossier, several passenger vessels including COLUMBUS, MAGELLAN, MARCO POLO and RIGEL I illegally left EU waters for demolition in India under the false pretense of subsequent operational use.

There are environmental and labor laws that regulate ship recycling, but they are ignored and easily circumvented by shipowners, often with the help of scrap metal dealers, known as cash buyers. These pay the highest price for end-of-life ships and usually rename, re-register and rename ships on their last voyage to beaching yards. Nearly half of ships sold in South Asia in 2021 reflagged to one of the blacklisted flags of Comoros, Palau and Saint Kitts and Nevis just weeks before hitting the beach. At least seventeen of these flag changes have allowed ship owners to circumvent EU ship recycling regulations, including two units belonging to Italian oil and gas company SAIPEM and two belonging to Greek European shipping. Their units ended up on a beach instead of being recycled at an EU-approved facility, as required by regulation.

“The EU recently reaffirmed in its proposal for a new waste shipment regulation that shipbreaking is a matter of environmental justice. Yet South Asia’s infamous shipbreaking beaches remain the preferred shipbreaking destination for many well-known European shipping companies. At least 1/3 of the tonnage scrapped in South Asia is European. Decisions to scrap these vessels in conditions that would not be permitted in the EU are made at offices in Hamburg, Athens, Antwerp, Copenhagen and other EU shipping hubs. This reality demands the introduction and enforcement of measures that effectively hold accountable the true beneficial owners of vessels, regardless of flags used and/or ports of departure,” says Jenssen.

The EU has so far approved 44 sites around the world as operating in a safe and environmentally friendly way. No South Asian yards have been approved due to lack of capacity to safely handle and dispose of hazardous materials, and lack of infrastructure to provide emergency response. Only 37 ships were recorded recycled at EU approved facilities in 2021, which is a minor fraction of what these yards are capable of handling.

But last year, five workers also lost their lives at Turkey’s Aliağa ship recycling yards. On February 4, a worker died when he was hit by a block of steel he was cutting with a torch in the secondary cutting area of ​​the EU-approved Simsekler yard. On July 12, Yılmaz Demir and Oğuz Taşkın were on board a Carnival-owned cruise ship at the Metas shipyard when they were suddenly caught in flames. Yılmaz died at the scene, while Oğuz succumbed to severe burns three days later at the nearby hospital. Two months later, Veli Bal and İlyas Bıdık were fatally hit by a rope that broke during dismantling operations at the same facility, which was recently acquired by EU-licensed yard Ege Çelik.

“The causes of accidents have unfortunately remained the same over the past 30 years. However, workers also fall ill and die of occupational diseases many years after being exposed to toxic substances. Cancer rates in Aliağa are much higher than the Turkish average. Illegal practices in the removal and disposal of hazardous materials, such as asbestos, are ignored. Aliağa is dying, along with its shipbreakers, under the very heavy load and pace of full order books and growing profits for an industry that is cutting corners on safety and environmental protection. Europe must take the lead in demanding higher standards and no longer assume that conditions are satisfactory just because they appear to be compliant on paper,” says Asli Odman, academic and volunteer at Istanbul Health and Safety Labor Watch.

Clean and safe solutions are available, and in light of new policies to promote a circular economy, several companies are now exploring the use of derelict dry docks for ship recycling. It is high time for the sector to leave the beach and move to real industrial sites where workers and the environment can be preserved.
Source: NGO Shipbreaking Platform